16 Reviews
See 1 Question & 1 Answer
Item: ABB3
7.99
1. Select type:
2. Select size:
Pet Qwerks Talking Babble Ball - Small 2 1/8"
Babble Balls are made with improved technology that triggers interactivity whenever the pet breath, touches or recieves any type of vibrations caused when a pet walks past the toy. The Babble ball talks and make exciting animal sounds that pets will be sure to enjoy. The Babble Ball automatically turns off when you pet isn't playing with it.

Add to cart to see low price
$7.99
You Save: $1.00!(11%)
Pet Qwerks Talking Babble Ball - Medium 2 3/4"
Babble Balls are made with improved technology that triggers interactivity whenever the pet breath, touches or recieves any type of vibrations caused when a pet walks past the toy. The Babble ball talks and make exciting animal sounds that pets will be sure to enjoy. The Babble Ball automatically turns off when you pet isn't playing with it.

Add to cart to see low price
$8.99
You Save: $1.00!(10%)
Pet Qwerks Talking Babble Ball - Large 3 1/8"
Babble Balls are made with improved technology that triggers interactivity whenever the pet breath, touches or recieves any type of vibrations caused when a pet walks past the toy. The Babble ball talks and make exciting animal sounds that pets will be sure to enjoy. The Babble Ball automatically turns off when you pet isn't playing with it.

Add to cart to see low price
$9.99
You Save: $1.00!(9%)
Pet Qwerks Animal Sounds Babble Ball - Large
Pet Qwerks Animal Sounds Babble Ball is a fun interactive dog toy to entertain your pets for hours on end! With a single touch, the toy will activate and play any one of the 20 different animal sounds to keep your dog engaged and active. You don't have to worry about turning it off on your own either because this toy shuts off automatically when inactive! Watch your pet chase, chew, and paw at the silliest toy ever!

Animal Sounds Babble Balls for Dogs, Cats or Birds are made with improved technology that triggers interactivity whenever the pet, touches the toy. The Babble ball talks and make exciting animal sounds that pets are sure to enjoy. The Babble Ball automatically turns off when you pet isn't playing with it.

1477150971
Write a Review
Review Summary
4.6
16 Reviews
5
69% (11)
4
25% (4)
3
6% (1)
2
0% (0)
1
0% (0)
100% Recommend this product (16 of 16 responses)
By Cyndee
VA
Babble Balls are TOPS according to Mia
October 22, 2016
This is the second Babble ball that my Frenchie has had. Her first one was for her first Christmas a couple of years ago. She looks at it with a puzzled expression them she starts kicking it with her front paws allowing it to move. She has really got the hang of it with the noise. Recently, I ordered both the animal sounds and the talking ball. I believe this is her best toy yet!!! I recently ordered an animal sounds (large) for my daughter's Bulldog whose birthday is in Nov. so that will be her gift.
By mlbalser
Williamsport, IN
Keep them busy.
December 16, 2015
This is a perfect activity for any dog. Keeps them busy, surprises them, and entertains everyone in the house. She doesn't have to touch it, just moving around or past it will make both girls start to play and hunt for whatever is making the noise. The words spoken or the animal sounds from the other one are so cute and just entertain everyone around it watching them play. I just love this toy and both of my girls adore it. Great for any dog!

By Jekyll
NC
Loves it!!!
August 8, 2015
I got one of these after he wanted a minion.. he has knocked this around and stared at it trying to figure out where the noise is coming from... He has also considered dissecting it as well ... so he definitely needs some supervision with this toy, after he has knocked it around and chased it awhile... It is a cute toy and it is of high interest...
By troygirl1
Burbank, CA
Great toy
March 31, 2015
My mini Schnauzer loves this--he gets so excited over the sounds it makes. Small size is perfect for him & he never wants to put it down. By far his favorite toy, he could play with it for hours but I monitor so the battery lasts longer. Battery has a long life but when you use it everyday it only lasts so long. Wish it came with replacement batteries. You can buy them but they're very expensive.
By Shuggah
Sedona, AZ
A hit right out of the box!
January 2, 2015
Other reviewers have expressed their pets were fearful of this toy, so I was a bit apprehensive. Our Bentley is 6 years old and has spent his life in a breeding situation...NOT a puppy mill!!! Just a situation where he was never socialized...never walked...taken for car rides...or given toys to play with. He is smart as a whip, and we are having a lot of fun helping him to have confidence and not be afraid of everyday things. When I pulled the plastic tab and this ball began making noise, Bentley was thrilled. He approached it a bit slowly, but in less than a minute he was playing with it and loving it!!! He is completely torn between wanting it all for himself and wanting me to play with it with him. It is so fun to see him so excited like this! I think this is a great toy...just hoping the batteries don't wear down too fast! 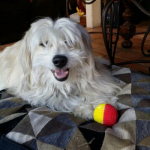 By Victoria
Houston, TX
Good purchase
August 21, 2014
My miniature dachshund loves it! And small itÂ´s the right size for her.
By Laura
Georgia
Small Size - Big Noise
June 19, 2014
Prepare for a loud pet toy! It makes animal sounds continuously as your pet plays with it. My chihuahua cries and growls with it. My cats chase it.
By GingerF
Portland Oregon
Constant chuckle
January 16, 2014
Every time we walk by the toy it lets out an animal sound that gives us a giggle and distracts attention from another focus. My dogs sister found it lots of fun form about 15 minutes and then we put it up for a while.
By Hugenaturelover
Alaska
It will drive you crazy - in a good way
September 20, 2013
My two dogs went nuts over this thing and as such it's all I hear from the moment I put it on the floor until I take it back again. The sounds are good enough to keep my one dog (who is difficult to keep entertained with toys) interested!
By SusieQ
North Canton, OH
Animal Sounds Babble Ball
April 27, 2013
My dog Buster recently went blind and one of the hardest things to watch was the fact that he could no longer chase after balls. That was his number one love of life. Then I found the Animal Sounds Babble Ball. I chose the one with the animal sounds. It is amazing to watch this blind dog be able to track and find this ball due to the animal noices he hears. What a great invention. It has given my Buster great joy to be abl to again find and chase his ball due to being able to track it from the sounds coming from it.
By mag
animal ball with sounds
January 12, 2013
Neither of my dogs took a interest to this ball.. But that is not to say other dogs wouldn't . It certainly does what it delivers and was very reasonably priced.
By Cocker-Friend
MD
fun
December 26, 2012
many different animal sounds. I have another w/people sounds. The dog plays for 10-15 minutes nightly w/it.
By Shiloh
Canby, Oregon
Animal Sounds Babble Ball
January 6, 2012
We rescued a miniature schnauzer in October. He's a wonderful, sweet dog but we found that he didn't know how to play. If we tried to play with him he'd run off with his tail between his legs acting rather frightened. This little ball did the trick. He was so curious about the sounds. At first he'd just stare at it and tilt his head, then he'd walk by it and as it would "babble" out animal sounds he'd start to wag his tail. He finally picked it up and started throwing it around. It seemed he wanted to hear more sounds. That was the beginning of getting him to come out of his shell with us. Now he's starting to interact with us more playfully, too. I need to order the other talking ball. Just fun to watch his reactions to a talking ball! So happy to see him play like the 2 year old that he is!
By JoyL
Portland, OR
Our dogs favorite toy
February 25, 2011
Our dog was a bit afraid of this when it first arrived. It is now her absolute favorite toy. Biggest problem is her losing it under couch and wanting us to drop whatever we're doing to get it for her.
By kathysgarden2
East Greenwich,RI
Animal sounds & talking babble balls
December 24, 2010
Great! Dogs have alot of fun.Ive bought both,nice and sturdy-had them for a year and only had to replace batteries inside 1X.each.Good interactive toy!!
By slinky
wonderful fun!
December 3, 2010
I bought this for my sheltie, who also had the regular babble ball & loves it. This one he REALLY loved. Unfortunately, it gave out way too soon so I'll buy a spare this time. I'm aware that the batteries can be replaced but that didn't seem to be the problem, just a lemon. But the toy is so great & strong enough to be picked up by the dog & thrown to run after makes is worth replacing as necessary!

1 Question & 1 Answer
Ask a Question
barbara
from colonial beach, VA asked:
September 29, 2014
is it made of rubber and does it bounce?
1 Answer
The outer casing of the ball is not made from rubber- but rather from non-toxic, hi-impact plastic; the ball bounces- though it is not particularly bouncy.
Submitted by: Customer Service on September 30, 2014
Most Helpful Answer