UPDATE (4/23/15): Dogs and their owners in the Chicago area have been battling a concerning outbreak of canine influenza since March of 2015. As mentioned previously in this article, this uncommon disease was reaching epidemic levels, but there have been new developments as the month has progressed.

A Different Strain of Flu

When the outbreak began, experts suspected that the strain of virus they were facing was H3N8, the more common strain of the canine flu virus previously observed in the United States. Researchers at Cornell University and the University of Wisconsin have determined, however, that this outbreak is caused by a different strain of the virus. This viral culprit is known as the H3N2 strain which is related to an Asian strain of influenza. While this strain is common in China and South Korea, it is relatively new to the United States.

With this new development, new precautions are being taken. Doctor Joseph Hahn of Merck Animal Health cautions dog owners that the vaccine for H3N8 may not be effective against this new strain of the virus. Additionally, this strain of flu can be transmitted to cats as a respiratory infection. There is no evidence that suggests this virus can be transmitted to humans.

Is the Outbreak Spreading? 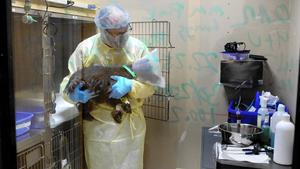 The epicenter of this outbreak remains in Chicago but cases of canine influenza have been reported throughout the Midwest. It is recommended for dog owners in the Midwest to remain vigilant and to avoid allowing your dog to come in contact with other dogs. Veterinarians in the Chicago area suggest that the best way to prevent the outbreak from spreading to your pup is by avoiding places such as kennels, groomers and dog parks where your dog may be exposed to the virus. If you are not a resident of the Midwest, you do not need to take preventive steps at this time, experts say.

Precautions and Other Concerns

It is still recommended to administer the H3N8 vaccine to your dog if your dog is exposed to other dogs frequently. H3N2 can live on hard surfaces for 48 hours and soft surfaces (such as clothing) for 24 hours, and the best way to disinfect an object is to clean a surface with bleach, if possible. Additionally, your dog cannot contract this virus from another dogs waste because this virus is entirely respiratory. If you have any questions or concerns about your dogs well-being during this outbreak, we strongly recommend asking your veterinarian as they will know the best course of action for you and your pet.

Boarding facilities, pet groomers and even a doggy Easter egg hunt have been closed to prevent the spread of canine flu in the Chicago area. With more than 1,000 cases and 5 deaths, this typically rare disease is wreaking havoc on Chicago dogs and their concerned owners. In the words of Dr. Jerry Kline, the supervising veterinarian at the Chicago Veterinary Emergency center, "It's almost an epidemic".

Canine flu, formally known as H3N8, is highly contagious between dogs but cannot be transmitted from dogs to humans or cats. Due to its contagious nature, Cook county officials are advising dog owners to avoid dog parks and other places that come in contact with many dogs. The symptoms for canine flu are very similar to the symptoms for human flu: lethargy, fever, poor appetite and persistent cough. Veterinarians suggest that it can take up to 10 days before a dog shows all of the symptoms.

Possible Cause of Outbreak

While canine flu is unrelated to kennel cough, veterinarians suspect that the recent outbreak of flu is due to a higher number of dogs in boarding during spring break. Within the past two weeks veterinarians have noted an increase in severe upper respiratory cases in their clinics. Additionally, the Department of Animal and Rabies Control cautions dog owners that this outbreak many not subside for several weeks.

Protecting Your Dog from Canine Flu

Dr. Anne Cohen of the Chicago Veterinary Emergency and Specialty center told ABC news that there is a two-shot vaccine that is administered over a three week period that is recommend for high-risk dogs. The shot is not typically administered on a yearly basis because canine flu is very rare and infrequently fatal. It is recommended to discuss this vaccine with your veterinarian if you are concerned about your dogs well-being. Furthermore, avoiding contact with other dogs and dog-friendly places in Chicago will help protect your dog from potentially contracting this flu.